No recording devices are allowed during the meeting, including phones. Photos/videos will be taken by representatives of the SacCountyGOP only. Thank you! 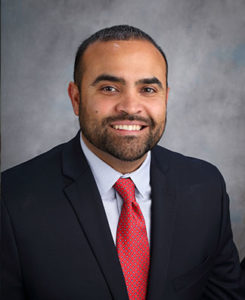 Meet the Candidate at our September 18 meeting! He has been unanimously endorsed by the San Joaquin County GOP in this open seat.

The Sacramento County Republican Central Committee now meets on the third Wednesday of the month. The next meeting will be on Wednesday, September 18, 2019, at 7pm. Check-in at 6:15pm and Reception begins at 6:30pm. Meeting starts at 7pm. You can expect the meeting to last until 8:30pm as we have a full agenda!

The agenda will include a review of current activities relating to the September Surge Voter Registration program. If your GOP group is participating, be sure to let Barbara Sloan know. She can be reached at barbara@saccountygop.com.

We will hear from SD 5 Candidate Jesús Andrade, and will consider a resolution opposing SD 27, an attempt to keep President Trump off the March and November ballots.

Our second guest speaker, Orrin Heatlie, will update you on the Recall of Governor Gavin Newsom. Petitions will be available that you can sign, or take with you to copy and circulate.

We will also discuss plans for the October 16 Salute to Republican Elected Officials Dinner. The keynote speaker will be U.S. Attorney McGregor Scott and returning as Emcee will be former Assemblyman Roger Niello. Tickets may be purchased on the event page.