SacCountyGOP Chair Betsy Mahan and others discuss the opening of the RNC Convention.

SacCountyGOP Chair Betsy Mahan weighs in with local Sacramento politicians on the choice of Kamala Harris as Vice President.

Local Republicans & Democrats React To The State Of The Union

Another historic State of the Union has been delivered — This time, by a president who has been impeached. The last president who delivered this barometer of the nation’s health under the cloud of impeachment was President Bill Clinton. Though Clinton wasn’t speaking literally the night before his anticipated acquittal. But, Clinton was acquitted by the Senate and President Donald Trump is poised to be acquitted today.

Trump covered many topics in a survey of accomplishments. He introduced a number of guests, including Venezuelan opposition leader Juan Guaido, who had been invited to watch the speech in the House Chamber.

Three local Democratic and Republican Party chairs join us to share their thoughts on the speech.

California’s 7th Congressional District was once a key battleground seat for Republicans.

Just a few years ago, the seat held by Democratic Rep. Ami Bera was actively targeted by the National Republican Congressional Committee.

The district was home to the country’s most expensive congressional race in 2014.

Sacramento County Republican Party Chairwoman Betsy Mahan lamented the party’s struggles in a November blog post, writing, “Andrew Grant couldn’t have worked harder, or been a better prospective Congressman, but voters were not listening and the money to run a proper campaign was not there.”

In particular, Mahan criticized Ivy, who has promoted himself as a “progressive Republican” pushing for universal healthcare, marijuana legalization, raising the federal minimum wage and adopting the framework of the Green New Deal. Ivy said he has been a no-party preference, Democratic and Libertarian voter at various points in his life.

“We have a delusional, newly registered Republican candidate, who doesn’t live in the district, and thinks he’s going to convince Republicans to support the socialistic policies of Bernie Sanders. No kidding,” Mahan wrote, later referring to Ivy as “Poison Ivy.”

“I am looking forward to more Republican candidates (real ones..) getting into the race to represent our principles and not play games with the election,” she continued. The local party endorsed Patterson, a former White House military aide under President Bill Clinton, for the seat.

SACRAMENTO (CBS13) — DC Democratic lawmakers are getting support from some Sacramento-area Republicans who are calling for President Trump to leave office immediately.

“I have to speak up because he has become a threat to our democracy, our constitution, and our republic,” says Mike Madrid, a California GOP Political Consultant. “Donald Trump not only obstructed the law but he was involved in bribery.”

Madrid is part of a growing group of Republican political consultants who are on a mission to unseat the president and are willing to take on members of their own party to do it. He says he knows he has an uphill battle, especially when some Sacramento Republicans say they aren’t buying his argument.

At the Sacramento County Republican Party meetings, there’s no shortage of Trump fever.

“I knew he was going to be a little unorthodox, but that’s what it took to make some changes,” Republican Eric Ragard said.

To them, the word “impeachment” is just a hurdle in the presidency that they say continues to be unstoppable.

Local Republicans are defiant in swatting down any belief Trump could lose a Senate trial or face a mass exodus of GOP voting support. GOP members insist their party won’t be shopping for a new candidate come 2020.

“He has put up with an amazing amount of abuse, and he keeps at it,” Betsy Mahan said.

Still, on the other side of the GOP spectrum, the anti-Trump movement is still alive in California. Madrid believes all his group needs to do is shave 5% of the vote from Trump’s support, and the president could lose his re-election next November.

Madrid’s group has gotten the attention and support of Trump critic George Conway, the husband of Kelly Ann Conway, who works for President Trump. 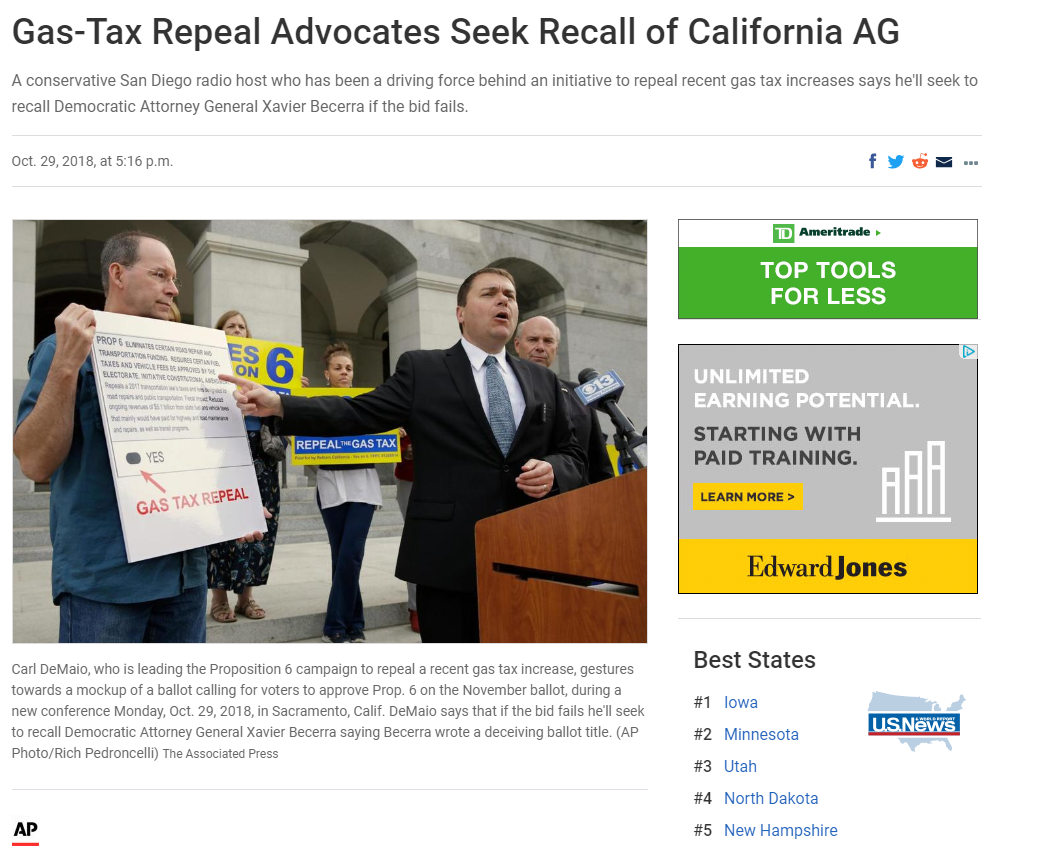 …The president isn’t on the ballot this year, nor is he expected to come stump for Republican candidates in California the way he is elsewhere. Yet his influence in the 2018 election is unavoidable in a state where his popularity is among the lowest in the country.

And voters like Scholes — educated, suburban women who can’t stand Trump — could tip the balance. “My observation is what’s happening in the organizing in District 4 is the majority of the feet on the street and the people doing the work are women,” Scholes said.

Republicans are countering by highlighting state-level policies and problems. Betsy Mahan is among those who think Democrats are overly optimistic.

Sacramento County Republican Party Chairwoman Betsy Mahan says she’s seeing a surge of interest at local headquarters from people who think this election is less about a president who’s kept his promises and more about how Democrats have mismanaged the state.

Mahan pointed, in particular, to the sky-high cost of living in the state. Her oldest child has moved to Idaho because he couldn’t afford a California apartment. “People are feeling like they are under siege,” she said.

CapRadio – October 8, 2018
The candidates for Governor debated on public radio on October 8, and Sacramento-based CapRadio with Beth Ruyak had local political representatives on her show to recap the debate. Betsy Mahan’s comments can be found late in the program in a segment that starts with Mike Madrid of Grassroots Lab (43:00) and Betsy’s comments begin at 43:50, followed by Mayor Steinberg. Listen to the entire recap at this link.

Listen to the Debate at this link. 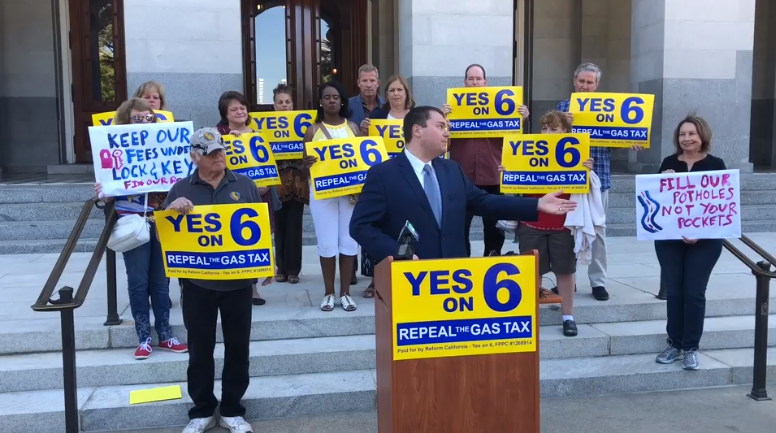 Read the story from the Sacramento Bee

Learn more about the Citizen Lockbox initiative that will be circulated for the 2020 ballot.

View the story on KCRA

Read about it in the Epoch Times

As city governments marshal their opposition to a Republican-led repeal effort of California’s new gas tax, the fate of the 12 cent-per-gallon surcharge could have broader implications for the Democratic Party.

There’s a question if more voters in November will believe this or insistence from gas tax opponents that California already had ample transportation funds.

“I think that voters are seeing more and more that the Democrat leadership in the legislature, it has an insatiable appetite for tax dollars,” said Sacramento County Republican Party chair Betsy Mahan. “We think they need to learn to live within their means and we don’t think that we have an obligation to enable their spending habits.”

Skepticism remains, though, with Mahan saying Prop. 6 supporters were preparing a 2020 ballot measure to dedicate original gas tax revenues to road maintenance and improvements, and to divert the car sales tax to state transportation rather than the general fund.

California billionaire Tom Steyer made his case before a large crowd at Beatnick Studios on S Street. He has spent more than $40 million in his efforts that launched in October 2017.

“Steyer is wasting his fortune on this endeavor. The voters have decided, and it’s time Democrats accept their decision.”

After barely edging out his opponents in three straight congressional races, Sacramento-area Rep. Ami Bera is in the unfamiliar position of being the odds-on favorite this November.

Local Republicans, however, insist that the narrow divide between Democrats and Republicans in district means it will inevitably be competitive and say Grant, a former Marine, has a shot at ousting Bera despite his lack of cash. As of June 30, Bera had $1.7 million in his campaign account, compared to just $72,000 for Grant.

Sacramento County Republican Party Chairwoman Betsy Mahan predicted that gap would close now that Republicans are uniting behind Grant. He bested another Republican, Fair Oaks Dr. Yona Barash, in the “top two” primary to advance to the general election against Bera.

“We have a much more aggressive grassroots operation this year,” she added.

California is not a model for the nation as to the possibilities of "progressive" government. It's a warning to the nation about the perils of a corrupt government.

Most Voters Say News Media Have Too Much Influence Over Government https://www.rasmussenreports.com/public_content/politics/general_politics/january_2021/most_voters_say_news_media_have_too_much_influence_over_government

No American tech company has any standing to lecture third world countries about censorship. We see you now. Some of us have seen you for a long time. https://twitter.com/Policy/status/1349059275461685250