Our Promises Will Be Kept 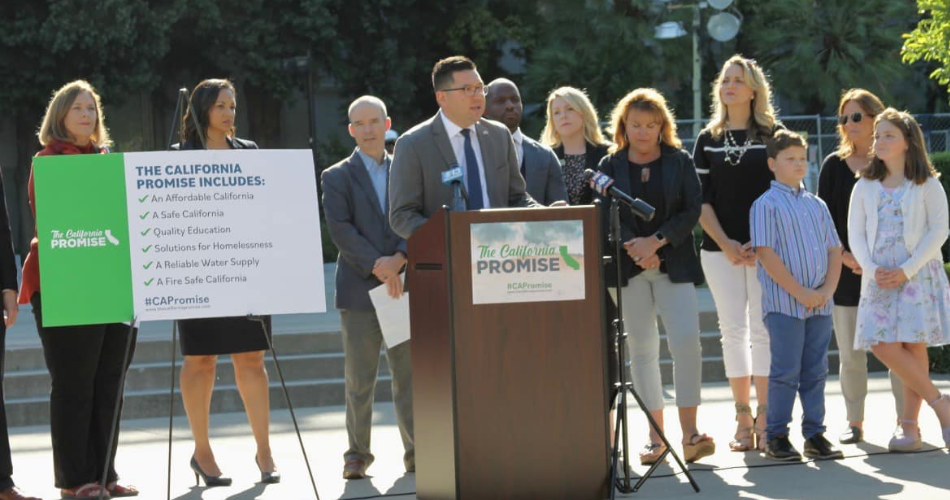 Ballots are arriving in the mailboxes of Sacramento voters, and it’s time to decide the future of California

As Sacramento County Republican volunteers talk to voters at their doorstep, on the phone, or at community events, we hear the same plea over and over – please save our state. We don’t have to spell out today’s issues because residents of every community are living with the consequences of one-party rule and mismanagement of our government.

It’s personal. As a small business owner, mother and grandmother, and fourth generation California native, I’ve experienced having to close my business because of AB 5, and I’ve waved to my adult children as they’ve driven off to other states where they can afford to live and want to raise their children. My experience is echoed in every family that begs us to bring new leadership to Sacramento.

What will it mean if voters stay home, and the current leaders remain in power?

Under Democrat rule in Washington and Sacramento, we have high inflation, a recession, soaring gas prices, food and supply shortages. Businesses can’t find people who will come to work. Our open border brings in labor and drugs to enrich the cartels. Our schools are failing our students as unions impose their political agendas that are intentionally hidden from parents and have nothing to do with preparing kids to compete for jobs. Criminals have been emboldened by out-of-touch DA’s and our Governor who set them free to appease radical activists seeking so-called equity and justice. We are told we have a water shortage while millions of dollars sit idle that were intended to improve storage. Those water shortages have led to increased poverty in the Central Valley as farmworker unions focus on strengthening their power instead of saving jobs.  And fires continue to pollute our atmosphere, destroying lives and habitats because forests are mismanaged.

Just a few days ago, the Governor called for the Legislature to come back into session to pass a new tax on oil companies. Republicans responded by pointing out the obvious result, which will be even higher prices at the pump. They called for a roll back of current gas taxes, the highest in the nation, as the quickest, most cost-effective way to provide relief.

Instead, Democrats have timed a taxpayer-funded check to arrive along with your ballot. They’re also hiding their affiliation with the Democrat Party (reported in the Sacramento Bee), as we see large campaign signs appear using terms like Independent and Thoughtful (Ken Cooley) or slogans on websites such as Making A Real Difference (Ami Bera)…but nothing about being progressive or Democrats. They’re also posing as born-again crime fighters and defenders of Democracy…which is inconsistent with the way they have been, and will continue to be voting. Meanwhile, notice that the homeless are being swept out of site, just in time for the election. After November 8th, they’ll reappear, still homeless, and in need of services that should have been paid for by the hundreds of millions of dollars appropriated to address the crisis.

Democrats always come to the middle when it’s election time, because that’s closer to where the voters are. So why don’t they stay there and actually solve some problems?

Those of us Republicans who haven’t fled the State of California are craving leaders who will do the hard work to develop and implement solutions. Last week, I was pleased to join with Republican leaders on the steps of the Capitol to announce The California Promise, a commitment to reforming state government and restoring balance at the State Capitol. Our leaders in the Assembly and Senate, along with candidates Josh Hoover (AD 7) and Joe Patterson (AD 5), talked about the measures introduced at the state and local levels to address these crises only to be shot down by Democrat elected majorities. They outlined the solutions that are achievable, but only if we elect new leaders who have the courage to go against powerful special interests who currently control Sacramento.

An Affordable California – We will deliver a state where working families can afford their home, gas, utility bills and groceries. We will protect Prop 13 and reverse excessive fees, taxes, and regulations.

A Safe California – We will fully fund the police, end the early release of violent felons and support effective rehabilitation and re-entry programs like the First Step act.

A Quality Education – We will support reforms that retain good teachers, offer curriculum to prepare kids for the jobs of the future, and allow parents to obtain the best education for their children.

A Solution for Homelessness – We will get people off the street and into programs that address addiction and mental illnesses.

A Reliable Water Supply – We will upgrade outdated water infrastructure and build new storage facilities to ensure our cities and farms have access to clean and reliable water.

A Fire Safe California – We will make major investments in wildfire prevention projects and streamline regulations that slow down efforts to minimize fire danger.

These promises to Californians represent common sense solutions and are supported by voters regardless of party preference. But they can only see the light of day if we remove the people standing in their way.

We know parents want to work with teachers, not against unions. They want their kids to be able to play safely in their front yards.  Entrepreneurs from all economic levels want California to be the place where they can be creative and set their own hours to accommodate their families or other interests.

Residents want California to be a place where everyone has the opportunity to thrive. They don’t want lower expectations, they don’t want excuses or finger pointing, they want solutions. And that is our promise.

Please do everything you can to support our candidates by visiting our Volunteer page and choosing the activity that best fits your schedule. We will make it easy for you to make a difference in this election.

View our list of endorsed candidates on our Voter Guide page, including school boards, city councils, special districts, and those running for the State Legislature, Congress, and statewide constitutional offices. You’re welcome to download the voter guides on this page that have been broken down by Assembly Districts, and to share them with friends, colleagues, and neighbors who may have lost hope that California can come back to the prosperous and exciting place before the Newsom era.

We also invite you to come meet the candidates on Sunday, October 16th as we gather to rally for a victorious November election and a hopeful future. Please let us know if you can stop by to enjoy some delicious barbecue, drop off your ballot, and talk to the candidates.